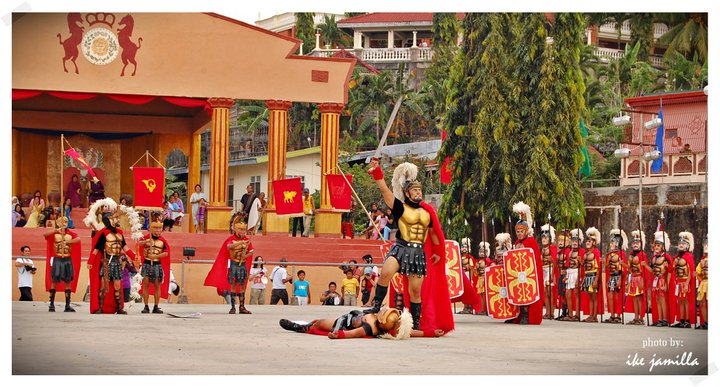 Moriones Festival started in 1807, when the parish priest of Mogpog, Father Dionisio Santiago arranged a play based from a biblical story of Longinus (or Longino), one of the Roman centurions designated to execute Jesus Christ.  Longinus, who was nearly blind pierced the side of Jesus while He was hanging on the cross. With a drop of blood that fell on his eyes, Longinus was miraculously healed. It was then Longinus exclaimed his faith and converted to Christianity. Because of his proclaimed faith, he left the army and got arrested because of his faith and later sentenced to be beheaded. 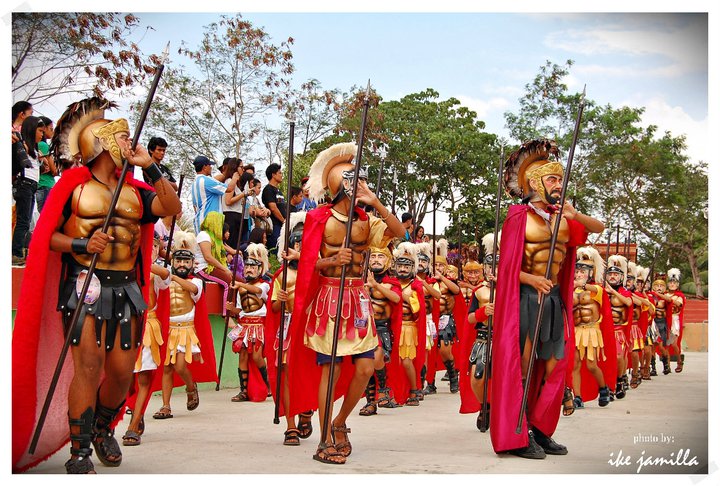 Today, Moriones Festival turned the entire province of Marinduque as a collective reenactment stage of those biblical events. All towns in Marinduque perform its own celebration of Moriones Festival, mainly as a religious devotion. During the festival week, the Morions (participants the event) take the streets under scorching heat of the sun and their costume. The Morions perform a “rage” thru sword fights, sneaky stares to the bystanders and mockery, while the selected “Longino” hiding behind the spectators. The climax of the play culminates in the “beheading” of Longino and later followed by a parade of his” lifeless body”. The reenactment of the participants is heartfelt and the message of the play is well delivered to the audience.  Every spectators will be moved by the devotion and the emotion of the participants.

Adding to the religious concept of Moriones, is the colorful interpretation of the Marinduqueños to this event. A remarkable festival that also showcases the craftsmanship of Marinduqueños thru the intricate masks, costumes, wooden shield, swords, and spears used by the Morions. It takes months for a mask to be done and kept as a secret by the Morion even from its close family members. An act that adds to the mystery of the play and builds excitement to the entire village. Truly, Moriones Festival is a combination of religious devotion and fine craftsmanship, an event of unique celebration.

If you enjoyed the bits of information about the Moriones Festival and wants to read more from The Mixed Culture, make sure to subscribe to my mailing list to read my latest blog straight from your inbox. Or, follow me on Facebook or Instagram for the latest scoop from me. Feel free to email me for any questions or comment below.

Your feedbacks are highly appreciated. Drop us some notes. Cancel reply

This site uses Akismet to reduce spam. Learn how your comment data is processed.